What is the difference between Rabbit and Hare? - ProProfs Discuss

What is the difference between Rabbit and Hare?

The difference between the rabbit and the hare lies in their appearance and habits. Hares are bigger than rabbits, and they are also faster due to their longer hind legs, which allows them to achieve a more impressive hopping distance. Newborn hares are covered with a full coat of fur, while a rabbit is born hairless.

A young rabbit is also called a bunny, while a young hare is called a leveret. A young rabbit is born to the mother rabbit, and they nest in an exclusive pile of grass, tender stems, and tree bark they have constructed, which forms a soft cushion, and the mother spreads a layer of her fur to make the nest for her young. Hares, on the other hand, are born independent and their mother feels confident to leave them to fend for themselves.

A hare, in a sense, is a wild animal, and they are typically not kept as pets. The brown coloration of the rabbit is characteristic of the traditional rabbit, whose fur changes to gray in the summer. The hares that generally populate the cold regions turn snow-white in the winter. Rabbits are nocturnal, as they are mostly awake from dusk to dawn. Rabbits bury their heads down in the burrows, while hares typically hide among the plants away from predators.

When it comes to size, they are already different from each other. The hare is normally bigger than the rabbit. They are also a bit different in terms of appearance. At first glance, they may normally look the same. If you would check them, you will notice that the hare will have longer ears and legs.

Hares and rabbits are two types of animals. They are often confused with each other because they come from the same type of family. They belong to the family Leporidae. Though they belong to the same family, they come from two different species. Another difference between them is related to their pregnancy. When a hare is pregnant, it can be pregnant for 42 days. The pregnancy of a rabbit is much short, lasting about 30 days. Along with their pregnancies, they differ in how they make their homes. A rabbit lives under group, and they make their homes in burrows. On the contrary, hares live above ground. 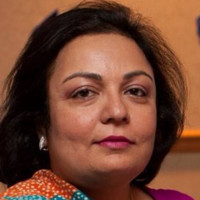 I am passionate about learning and growing as a person. I love to travel and see different cultures and foods.

Hares and rabbits belong to the same family, Leporidae, but from different species. A hare's pregnancy lasts 42 days, compared with rabbits' pregnancy, which lasts in 30-31 days.